so long as they don’t mean

the destruction of another

even if they differ

but let them not

be the stuff of negation.

and raise the level

and of our collective home.

may they propel you

forward into the Light.

Happy Veterans Day to all who served, in “times of peace” and in open conflict.  I regret one thing about 11:11:11/18- I was resolving a conflict over material possessions (someone else’s) at the time, so I missed the reflection which that time merits.

Basically, I have been storing items for a benighted and angry individual.  I had temporarily forgotten where they were stored, and was thus subjected to yet another tirade about how stupid and worthless I was.  Fortunately, this was all electronic, a “hit and run”, so to speak. Even more fortunately, I found the items, they will be transported to a third party, tomorrow and I will be free to ban the above-mentioned person from ever contacting me again.

I have had it with detractors and naysayers-as opposed to sincere, earnest critics, who point out errors, out of love.  The latter will always have my attention.

It has taken a  long, long time for me to value myself and to know that those who lambaste me  are not worth my time.  That time has arrived and I know, both in heart and mind, that I deserve the best that life has to offer.  Actually, we all deserve the best. The fact that some have been raised to regard themselves as worthless, is precisely why there is so much conflict-whether over THINGS,  or over ideas, or over social norms.

If each of us really understood the Universe, the nature of Creation, the eternity of being, then there would be no conflict of egos.  There would have been no Lucifer’s rebellion; no smug disregard, by our distant ancestors, of spiritual instruction; no ongoing conflict, often perpetrated by those who cast themselves as “enlightened”, but whose egos only project utter darkness.

I can’t claim to understand it all, but I do understand these:  There is only a place for Light in this world, in this Universe.  There is only a future for those whose hearts are open, whose goals are based on unconditional love.  All else will fail, and will fall away, in confusion and disappointment. More’s the pity.

There is ever a power in love.

It is the greatest, and most inextinguishable power,

in all Creation, and is the reason for Creation itself.

God so loves the world,

that He sends His Message to Humankind,

as He sees our need.

Thus did He send the Spirit of the Son,

some two thousand, seventeen years ago.

there appeared the Person of Baha’u’llah,

literally the Glory of God.

The Presence of God is always

the Light of the World.

Only our lower nature

can blot out that Light.

The Sun of Truth rises,

whenever the darkness is

that one could cut it

truth will be resurrected,

rough around the edges.

for mankind to finally

in the Light of God.

(Baha’u’llah, founder of the Baha’i Faith, revealed His Teachings for a Divinely-inspired unification of the human race, in the twelve-day period preceding His departure from the Ridvan Garden, in Baghdad, from whence He and His family were to go to what is now Istanbul, on a second stage of exile.  This period is commemorated each year by Baha’is, as the Festival of Ridvan.  This year, the Festival is April 20-May 1.)

Be forewarned, this post is heavy on photos, and tends towards gaudiness, but that is Chateau de Versailles- and those were the Bourbons.  It is an exhausting place to visit, but I am glad to have gone through the chateau first.  The gardens, and the town of Versailles, are most refreshing.

I am glad to have gone through all the chambers, and great halls, as they tell the story of  several mens’ excesses, on the backs of their fellows, as well as any other great monument around the world.  If you are put off by all the gold and finery, you are in a good place.  We all know to what this excess led. 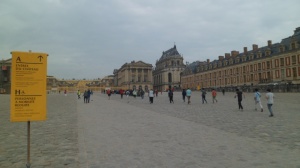 We start in the front courtyard, where one gets a sense of the enormity of the completed palace.  Know that this chateau was intended as a place of refuge for Louis XIV and his successors.  Versailles, from the 16th-19th centuries, was very much a country town.  Paris, then as now, was lovely, exciting- and exhausting, for the royals as for everyone else. 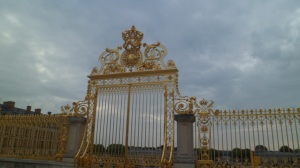 The first gilded gate, the detail of the front entry point and the ceiling of the antechamber follow.  Creation and classical mythology are themes covered over and over by the architects and landscapers of Versailles:  Andre Le Notre, Charles Le Brun, Jules Hardouin-Mansart and, under Louis-Philippe I, Frederic Nepven.

Next, two mythological characters, depicted in statuary, greet visitors as we go through a series of halls that tell the history of the chateau, from Louis XIV to the time of Louis-Philippe I, who bestowed this magnificent place upon the people of France, as THEIR treasure.  The gold, the marble and the enormity thus reverted to their truly rightful owners.  These are followed by “Tres Casques”, great gold pieces, representing helmets. 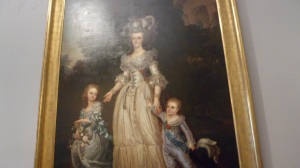 Moving along, we see a portrait of Marie Antoinette, her son, the Dauphin, and his attendant, Madame Royale.  Next is Louis-Philippe, mounted on horseback, followed by his architect, Frederic Nepven. 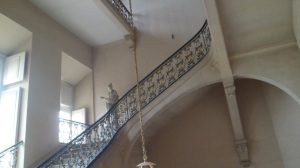 Up the staircase, and down another long hall we go, to the salons. A series of halls, each named for a particular Roman god or goddess, were used by Louis XIV for regular audiences.  Salon de Diane, for example, was used as a buffet room.  Salon d”Apollon was a concert hall.  Salon de Mars was the ballroom. 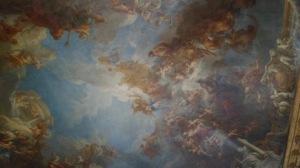 Three scenes from the Hall of Mirrors are next,(photos 22-24).  This great  hall was constructed under the supervision of Louis XIV’s crafty Treasure, Jean-Baptiste Colbert, who brought in several Venetian mirror craftsmen, at great peril to themselves, to fashion this great hall.  It links the King’s bed chamber with that of the Queen.  Louis had himself as the focus of the portraits and statuary. 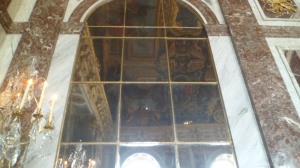 Views of the Queen’s bedchamber follow, with the famed portrait of Napoleon I, crowning first Empress Josephine, then himself, as a later addition to Court de la Reine. 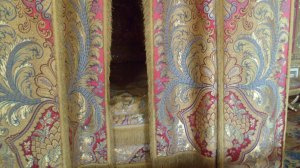 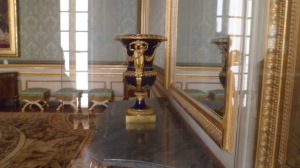 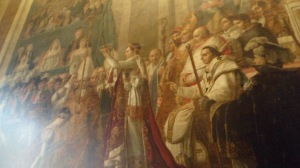 A view of the Inner Courtyard is next, and we finished our tour of the Chateau with visits to the apartments of Louis XV’s spinster daughters,  Madame Victoire and Madame Adelaide.  These ladies had little use for Marie Antoinette, their niece-in-law, and heeded the warnings by the peasant women who marched on Versailles, in 1789, leaving the Chateau for Italy, then for Greece, where they lived out the rest of their lives together.

The story of the Bourbons is a hard one, in the end, and fully illustrates how it is that we all have to hang together in this life, not vaunt ourselves over one another.

NEXT:  The Palace Gardens